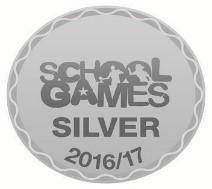 We were delighted to announce that we, Binley Woods Primary School, have achieved the School Games Mark Award for the 2016/17 academic year.

The School Games Mark is a Government led award scheme launched in 2012, facilitated by the Youth Sport Trust to reward schools for their commitment to the development of competition across their school and into the community, and we are delighted to have been recognised for our success.

Our sporting achievements in this year included: Competing in a netball tournament, taking a cross country team to 3 events and reaching the final, taking athletes from Key Stage 2 to a local competition.

With a total of over 70 young people competing in local inter-school competitions, we are extremely proud of our pupils for their dedication to all aspects of school sport, including those young volunteers, leaders and officials who made our competitions possible.

Unfortunately not the ones with chocolate chips.

Some cookies are necessary in order to make this website function correctly. These are set by default and whilst you can block or delete them by changing your browser settings, some functionality such as being able to log in to the website will not work if you do this. The necessary cookies set on this website are as follows:

Cookies that are not necessary to make the website work, but which enable additional functionality, can also be set. By default these cookies are disabled, but you can choose to enable them below: